Developing equity-focused, data driven policies requires intentional actions. In a powerful and illuminating session, Carlise King and Esther Gross with Child Trends shared tips and strategies for applying equity principles to how we think about, use and communicate data.

Joined by a trio from Minnesota bringing the application to life, Allies were offered a critical look at how to incorporate racial equity principles into advocacy work.

Watch the recording of the presentation or download the slides. 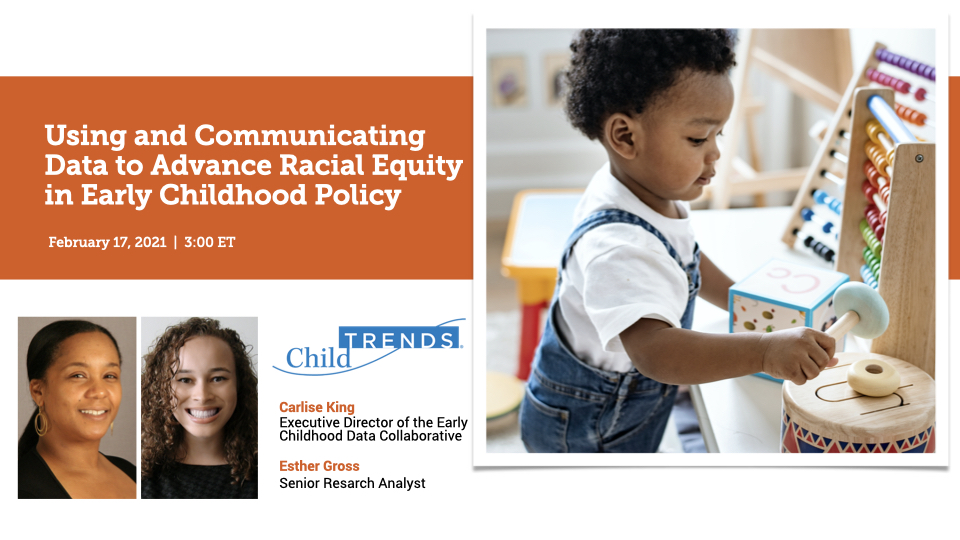 Esther Gross started the presentation by defining racial equity as both and outcome and a process – the outcome being the condition we will achieve when personal characteristics (like race and ethnicity, gender, sexual orientation) no longer predict how we will fare.

“Knowing your race, I should not be able to predict how long you will live. From a data perspective we will have achieved racial equity when there are no statistically significant differences by race. As we know, we’re far from there.”

The process, she said, is the work it takes to get there. Gross also kept advocacy wheels turning as she shared three key guidelines for equitable research communication guidelines, including:

Carlise King followed up with insight on using data to understand and combat racial disparities. She pushed allies to go beyond documented disparities and said the path to achieving equity using data is to identify underlying causes and proposing solutions.

Allies then heard from Bharti Wahi, Executive Director with Children’s Defense Fund of Minnesota, who shared why — as an advocacy and policy organization — they chose to examine racial disparities in access to services for families.

CDF Minnesota recognized that the state had some of the worst disparities between children of color and their white counterparts and systems and structures that were designed around the concepts and constructs of race were preventing people from fully being able to realize their own agency.

Stephanie Hogenson, now the Policy Director for the Minnesota Children’s Cabinet (formerly with CDF-Minnesota) led work to take a closer look at what was happening with state program participation through combining the excellence of their early childhood longitudinal data system and partnership with stakeholders across community to create context and deeper understanding to drive better policy and outcomes.

Jennifer Verbrugge with the Early Childhood Longitudinal Data System highlighted the journey of Minnesota’s data system – from the launch, to early concerns and subsequent improvements – and how it serves both state departments and advocates for mutual benefit.

The presentation was part of the Alliance for Early Success National Issues>State Action series, which features a national expert on an early childhood policy topic, followed by state advocates who care share their experiences in the same area.

PrevPreviousWhat If We Made Well-Being Our Bottom Line?
Next2020 Early Childhood Workforce Index Provides Powerful State-by-State Data on Wage CollapseNext