States across the country are expecting a high level of legislator turnover due to redistricting, burnout, polarized political climates, and more. Advocates who have collaborated with champions for early childhood development and learning find themselves searching for strategies to established credibility and build relationships with new legislators in hope of cultivating new early childhood champions.

Based on this reality, the Alliance for Early Success hosted a “huddle” with state advocates to discuss how to continue pushing forward wins for young children and their families within a newly configured legisalture.

During the huddle, Mindy Binderman from Georgia Early Education Alliance for Ready Students (GEEARS), Shannon Jones from Groundwork Ohio, and Riley Kitts from the Colorado Children’s Campaign shared insights and best practices for educating and working effectively with legislators. The panelists and attendees covered strategies for engagement during both the election season and the legislative session itself. Overall, the advice shared during the huddle boiled down to three major points: 1) Be consistently visible throughout the year by sharing data, research, policy briefs, and other resources; 2) Remember that politicians are people and need to be invested in the same way all people need to be invested in; and 3) Trust is valuable currency.

During the Election Season

Reaching out to candidates for state house and senate seats before the election can help establish strong relationships that will last through the legislative session and beyond. Being a candidate can be a vulnerable time and it’s likely that candidates will remember those who reached out before they were elected. By establishing a relationship early on, early childhood advocates can better compete with private interest lobbying firms by being at the front of the line. If limited resources mean prioritizing which candidates to cultivate, our allies recommend reaching out to new candidates rather than incumbents because candidates are more likely to remember the people who invested time in them. 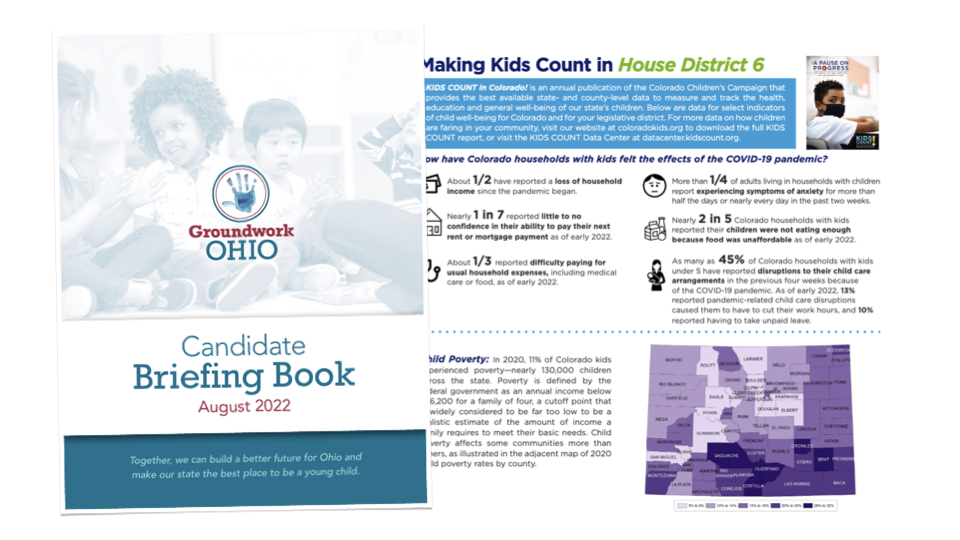 Many Alliance allies send informational packets or briefing books to candidates that include an overview of early childhood issues facing the state as well as data about that candidate’s specific district. By sending information to every candidate running for that office, including Republicans, Democrats, and other parties, our allies maintain their nonpartisan approach. Being a credible source of data, research, and facts – especially with district-specific resources – is a key strategy for creating visibility for your organization. And, as a plus, the materials can be used throughout the year with elected officials, advocates, donors, and more.

Competing for candidate and legislator attention with other, better-funded policy issues can be a challenge, so our allies recommend using relationships, signature events, polling data, and messaging to gain attention. Advocates at GEEARS demonstrate public support for early childhood investments by sponsoring a poll of likely Georgia voters and hosting an early childhood summit every four years when the governor is up for election. Both the poll and the early education summit (which recently attracted 600 in-person attendees and 2,000 online attendees) show the strength of support for early childhood issues across diverse populations, reminding candidates and legislators alike to make it a priority. Do legislators seem all in on a particular issue, like business development? Let them know how early childhood policies help to advance their priorities as well.

Once the election has taken place and the legislators for the coming session have been seated, advocates have new opportunities for establishing credibility and building relationships. Newly elected legislators will appreciate seeing a friendly face (that they may remember from the election season.) By being of service early on, you can help make your meeting requests remain a priority at the height of the session. Since advocates like you may be more familiar than new legislators with the players at the capitol, advocates can introduce key contacts and help cultivate connections. Building relationships and influence with legislative staff can also help to ensure that you maintain access to the legislator when their time gets short later in the session.

Additional strategies to catch the attention of new legislators and building them into champions include:

Over the course of the legislative session, it’s important to devote some level of attention to all legislators, even if they’re not onleading on your issues. When gauging whether a proposed policy is viable, our allies emphasized the importance of talking to every member of a committee and not assuming their position. It’s essential to collect three pieces of information from each legislator: (1) Are you for or against the legislation? (2) if you’re against, are you going to be passive or active in your opposition? (3) If you are undecided, what information do you need to support? Understanding who has power and influence within a committee and within a political party can help to clarify which legislators may need more time and energy than others. For a legislator who has considerable influence, tamping down objections so that they do not actively oppose a bill can mean the difference between passage and failure.