Home » What Is Universal Pre-K?

What is Universal Pre- K?

“Universal pre-k,” also known as “preschool for all,” is a policy framework that gives all families with preschool-aged children the opportunity to voluntarily enroll their child in a publicly-funded pre-kindergarten care and education program in a state or community.

Such programs provide early care and education the year before children enter kindergarten, although some also serve three-year-olds. There are a variety of funding mechanisms — federal, state, and local — that can make universal pre-k a reality. Unlike the traditional public education system, many states allow programs outside the public school system (e.g., child care centers) to receive funding to operate pre-k.

Brain Science. Early childhood brain science shows that crucial intellectual, health, and social emotional development is happening long before age 5 — the year we begin formal education in the United States. Numerous studies show that young children, from infancy onward, who experience early care and education programs that provide consistent, nurturing, and developmentally-appropriate opportunities for cognitive and social development benefit significantly in both the short and long-term. These benefits have positive impacts not only on children and families, but also the broader communities as well.

Family Economics. Early care and education has become either an unmanageable expense or practically unavailable for many families. This lack of high-quality offerings can keep parents from pursuing the additional education or job training that could build their incomes, and it often means one parent opts out of the workforce entirely to provide care. Widely available early care and education can be a strong economic foundation for families and communities. Widely accessible high-quality pre-k can also help reduce racial inequity. The disparity in access to high-quality early education exacerbates racial inequities in children’s development. Not only does this limit the child’s ability to achieve, it also limits parents’ ability to maximize their incomes by working, which further impacts a child’s opportunity.

What are some concerns?

Quality. As states work to expand access to pre-k, they must work diligently to ensure the quality of the program(s). The National Institute for Early Education Research maintains a list of baseline quality standards, which includes maximum class sizes, minimum acceptable professional development, and other benchmarks. Importantly, quality standards should also be centered on families’ lived experience and needs, especially those from communities that are traditionally underserved, disenfranchised, and oppressed by systemic racism and sexism. As such, pre-k systems should promote culturally and linguistically responsive practices and support quality programs in diverse settings.There are numerous routes to preschool for all in a state, but they should all include a strategy for quality.

The Child Care Market. Across the United States, communities grapple with weak (and often non-viable) child-care infrastructure. The market economics of the system mean that many providers would struggle even more if three- and four-year-olds moved to a different program – leaving them with primarily infant care, which is the most expensive to deliver. Expansion of pre-k must be undertaken with an attention to the impact on the state’s child care providers and work to sustain and strengthen the broader early care and education system. A long-term study of Indiana’s On My Way Pre-K found its students were better prepared for kindergarten and scored slightly higher on ILEARN than children from similar low-income backgrounds. Read More >> 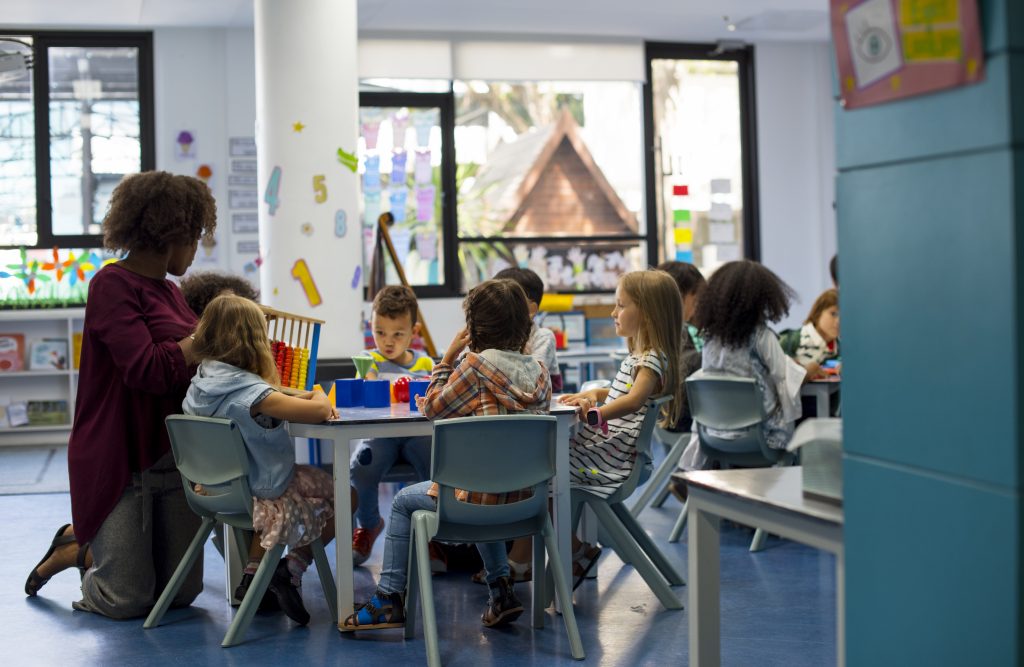 Alabama: The Persistence of Reading and Math Proficiency: The Benefits of Alabama’s Pre-Kindergarten Program Endure in Elementary and Middle School

University of Alabama researchers undertook a first-of-its-kind study using multivariable linear regression to determine the impact of Alabama’s First Class Pre-K program. The findings indicate that children who received the program were statistically significantly more likely to be proficient in both math and reading compared to students who did not. Read More>>

Want to stay up to date?