In the Alliance for Early Success’ most anticipated National Issues> State Action presentation to date, scholar and author Dr. Ibram Kendi spoke with the Alliance’s Communications Director Stinson Liles about antiracism and early childhood policy. Kendi, the author of New York Times bestsellers Stamped from the Beginning: The Definitive History of Racist Ideas in America and How to Be An Antiracist, expanded on his foundational belief that racial inequity is a problem of bad policy, not bad people. 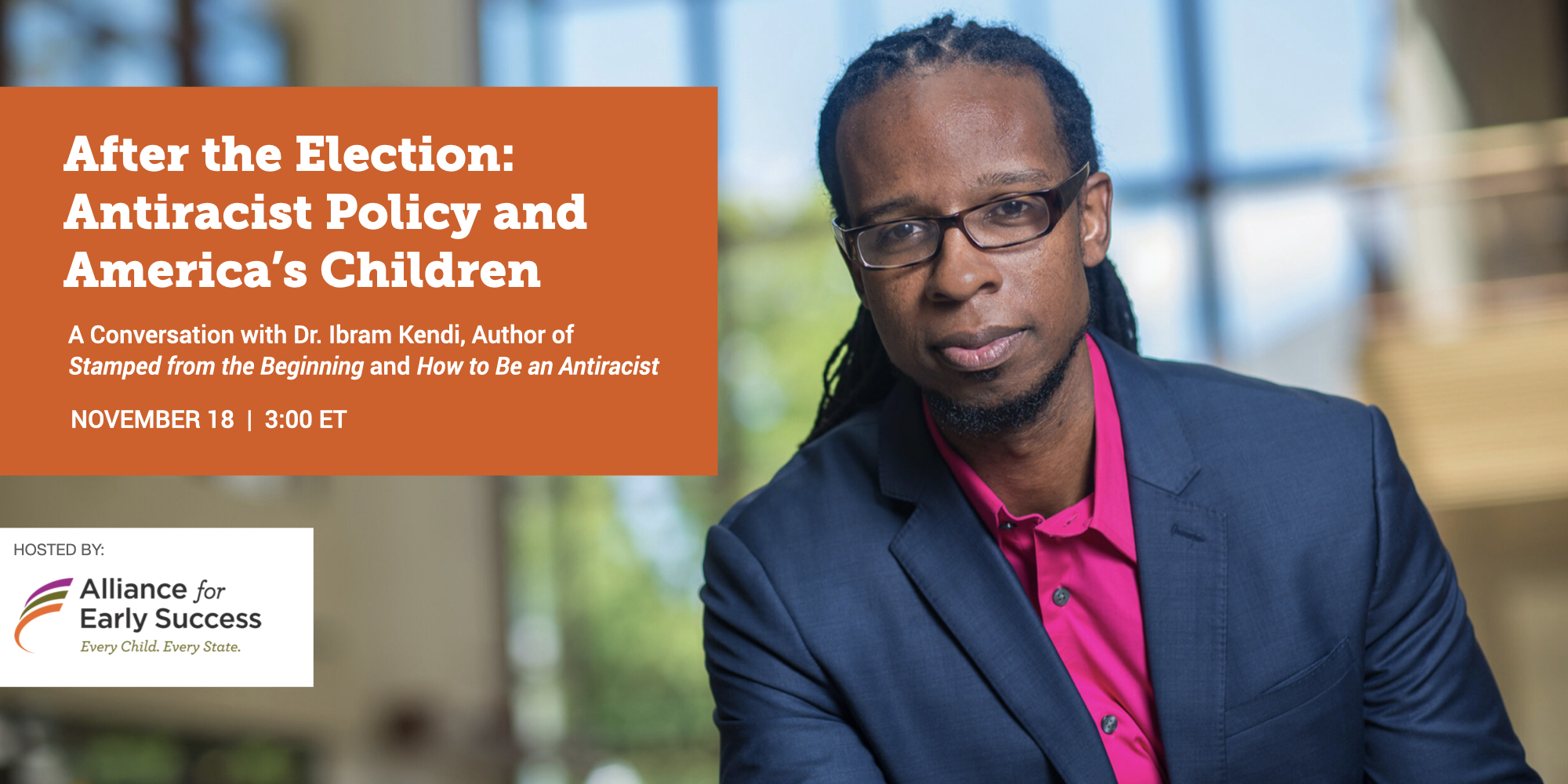 “We should be asking ‘Are these policies and practices leading to equity or inequity?’” he told the audience of state advocates, organizers, and policymakers.  “All that is relevant is the outcome of the policies in determining whether we should change them… All along we’ve been trying to change people when we really need to change policies.”

“All along we've been trying to change people, when we really need to change policies."

“Feelings advocacy,” Kendi says, distracts advocates and organizers with a focus on racist behavior. When we call out racist behavior or join a demonstration, he says, we feel better. But feeling better isn’t change. “The opposite of feelings advocacy is outcomes advocacy —  I’m not going home until something changes.”

When asked if that even means abiding – or indulging – racist behavior and attitudes if it leads to winning an antiracist policy, Kendi answered with a definitive yes. “I want things to change for millions of people – millions of children – as opposed to trying to change one individual person.” He went on to say that It can be helpful to change the viewpoints of people so that they see the problem is policy and not people, but that has to be done in the context of a campaign to change policy. You can’t start with changing hearts and minds and then move to policy once you’ve accomplished that.

Ibram Kendi’s talk on antiracist early childhood policy also included insight on numerous other areas in which policy and policy advocacy can be informed by antiracism.

In language, for example, we can avoid terms like “at-risk” that treat a person’s situation as his or her essence. “We can use terminology that speaks to how a group is being victimized… racist ideas should not be baked into our terms as we try to undermine racism.”

In our work to build and sustain a diverse early education and care workforce, we should look upstream, in addition to addressing our hiring and support practices. “You know, when college football coaches feel their pipeline is too small, what do they do? They build the pipeline in their state – by enhancing high school and middle school football programs. We should be doing that, too.” Kendi pushed attendees to use data and research to examine and address their community’s pipeline. “Where in the process are people of color being bottlenecked?”

And when it comes to the essence of our work – the education and development of young children – Kendi says that we certainly can introduce the idea of structural racism to preschoolers.

“It’s important, especially in a community where the resource rich part of town is predominantly white and the resource poor part of town is predominantly black, for us to talk about that – for us to say, ‘Those Black folks do not have less because they are less. Those white folks don’t have more because they are more.’ And then the student – even if they are five years old – will say, ‘So what’s the reason?’ And that’s when we can talk about unfair rules.”

In the end, though, Kendi brought his message for this audience of policy advocates back to his opening message: outcomes.

“We have to have some semblance that the polices we are advocating for are going to create more equity. And when they don’t create more equity, we have to go back to the drawing board – and actually the ‘research board’ – and find out where we went wrong, as opposed to saying somehow the people went wrong.”

“Any time any new idea or any old idea is pointing to the people being the problem, those people of color, even if it sounds believable — like all racist ideas do – we have to figure out a way to protect ourselves against them.”