Home » Inside Philanthropy Talks Advocacy Investment with the Alliance

Inside Philanthropy Talks Advocacy Investment with the Alliance

In this new article from Inside Philanthropy, the magazine explores Child Care NEXT and investors’ new efforts to give states sustained and substantial funding and access to the political sophistication and tools that other issue areas leverage for transformation. Read the article on their site here. 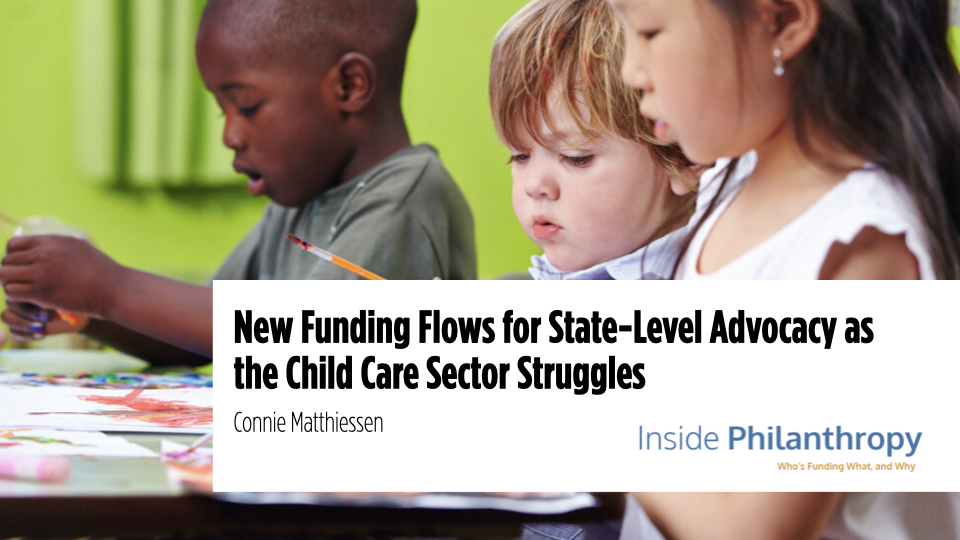 COVID-19 may have pushed America’s early childhood education crisis into the public eye, but fixing it gets a lot more complicated. This is a reality that both frustrates and animates early childhood education advocates like Elliot Haspel, author of the 2019 book “Crawling Behind: America’s Childhood Crisis and How to Fix It.” Haspel is also a program officer for education policy and research at the Robins Foundation, which includes education and innovation as two of its main program areas.

“Child care has no big lobbying group behind it, no big union,” Haspel said. “It isn’t the force other issue areas are, whether it’s K-12 education or healthcare or the environmental movement.”

The pandemic brought this reality home for Haspel. “It was last March and April, when COVID was raging, and child care was struggling to get any relief,” he recalled. “And in the CARES Act, the entire child care sector got $3.5 billion in relief funding. As many people have pointed out, that was the equivalent of what Delta Airlines received. This drove home to me how politically weak the child care sector is.”

Haspel wants the child care sector to have more clout, and he has formulated a roadmap to get there. His plan (which, he says, “evolved through many iterations by talking to some very smart people”) ultimately became Child Care NEXT, an initiative launched by the Alliance for Early Success to promote state advocacy for comprehensive, quality early childhood education.

To qualify for Child Care NEXT funding, coalitions advocating for early childhood education (ECE) in states around the country submitted proposals, and after a comprehensive application and review process, five states were selected from 36 applicants.

The winners in the first cohort were from Colorado, Louisiana, New York, Oregon and Virginia.

According to the Alliance website, teams from the selected states “have built strong foundations for operationalizing the core principles of Child Care NEXT, and they showed recent advocacy, policy, and revenue efforts in early care and education that demonstrate a commitment to ambitious and transformative changes in their states’ child care systems.”

For Haspel, “transformative” is the key word here. “The fact is that the American child care system is deeply broken,” he said. “It doesn’t just need incremental patches, it needs wholesale reinvention.”

The U.S. lags far behind other developed countries when it comes to support for early childhood education. As Haspel wrote last year in the New York Times, the United States ranks the third lowest among 37 developed nations in early childhood spending. As a result, he pointed out, the nation’s child care system
relies on parental fees and is still seen “largely as a personalized service instead of a public good.” For his 2019 book “Crawling Behind,” Haspel examined how other countries fund early childhood education. Canada, for example, is creating a nationwide child care system that will cost families $10 a day (parents making under a certain amount would pay less, or nothing at all). Finland has a well-funded system that guarantees a slot for every child.

Fees are a few hundred dollars a month. “And early childhood educators there are getting paid pretty decently,” he said. “Not as high as they should be, but better than what they are getting here.”

By comparison, early childhood education in the U.S. isn’t a system at all, but rather a random collection of private facilities, in-home centers and family caregivers. Despite annual fees that stretch many families’ budgets, these scattered operations were already struggling before COVID-19 and many are now facing collapse. Most can’t afford to pay competitive wages, and so must deal with constant workforce churn. Today, child care facilities around the country face a
worker shortage, which means they must limit the number of children they enroll, leaving parents, particularly those in “childcare deserts,” desperately searching for care.

According to Politico, 2.3 million fewer women are now working due to the pandemic. There are a number of reasons for this, but for many women, a lack of access to quality, affordable childcare is at the top of the list.

However, the pandemic does appear to have significantly raised government leaders’ awareness of ECE’s critical role. The Biden administration has made increased funding for the child care sector a central part of its American Families Plan (although its passage is still uncertain) and the recently introduced
Child Care for Working Families Act (CCWFA) would also boost child care access and affordability, and provide child care workers a livable wage.

Helene Stebbins, executive director of the Alliance for Early Success, is hoping Child Care NEXT will ride this wave of heightened awareness and contribute to the push for a quality, comprehensive ECE system. “We’re leaning into this and saying, ‘Can we reimagine what child care looks like? We don’t have to rebuild it the way it was. We can build it better,’” she said.

Like Haspel, Stebbins is convinced that small, piecemeal reforms won’t work; our early education system needs to be transformed from the ground up. And the Alliance for Early Success, a nonprofit that works with advocacy groups in all 50 states to promote quality early childhood education, is built on the idea of transformation. It grew out of an effort by the Buffett Early Childhood Fund to push policy to catch up with the latest science, which demonstrates that brain development flourishes in the early years, and that quality early education has lifelong benefits.

The alliance is backed by prominent ECE funders, including the Bill & Melinda Gates Foundation, the W.K. Kellogg Foundation, and the J.B. and M.K. Pritzker Family Foundation (see a complete list here). The alliance operates as an intermediary—investments from other funders are in turn granted out to state ECE organizations and coalitions.

The five Child Care NEXT state teams will receive multi-year funding: up to $200,000 the first year, up to $500,000 in 2022 and ongoing funding after that, assuming that the alliance can continue to raise the necessary cash. States are expected to provide $100,000 annually in matching funds. Teams will receive technical and other ongoing support from the alliance, national ECE experts and peer teams.

The aim, Haspel said, is to “give some states sustained and substantial funding and access to the same level of political sophistication and tools that these other issue areas are going to war with, and actually head toward that transformation.”

“Sustained” and “substantial” are the operative words here, because early childhood education has seldom received the deep, long-term funding it requires. Philanthropy is partially to blame for that, according to Haspel. “Philanthropy feeds into this by refusing, until pretty recently, to fund child care advocacy and organizing and to really give these groups the runway they need to think about what it would take to transform the child care system,” he said.

For Haspel, given the stalemate in Washington, support from philanthropy for state initiatives will be essential to improving the way we care for and educate our youngest children. “We’re looking at how philanthropy can catalyze work the states are doing. Look, if the federal government really pulls something off, I’ll be shouting from the rooftops.

But, traditionally, states have tended to lead the way—whether it’s Romneycare in Massachusetts leading to Obamacare or… many other examples of states acting as laboratories for new ideas.”

Stebbins notes growing support for ECE among philanthropists. “I’ve been doing this work for 20 or more years, and we have a lot more investors now than we used to,” she said. “The four investors that are funding Child Care NEXT are new, for example. They were not our investors prior to this.”

Still, Stebbins believes this is an area where funders could be doing substantially more. “I think that the role of philanthropy is to spark new ideas, to do things that don’t get done otherwise. And Child Care NEXT is a good example of that. You need someone to say it’s possible and to give people sustained support over time—and I can’t say that enough—sustained support over time. To not change the goal posts or switch the funding. The advocacy community will figure out how we bake it into our public funding streams and our public institutions so that once we’ve developed it, we can sustain it. Philanthropy’s role is not to sustain it forever, but they have a very important role to play.”

©2021 Inside Philanthropy; Reprinted with permission.