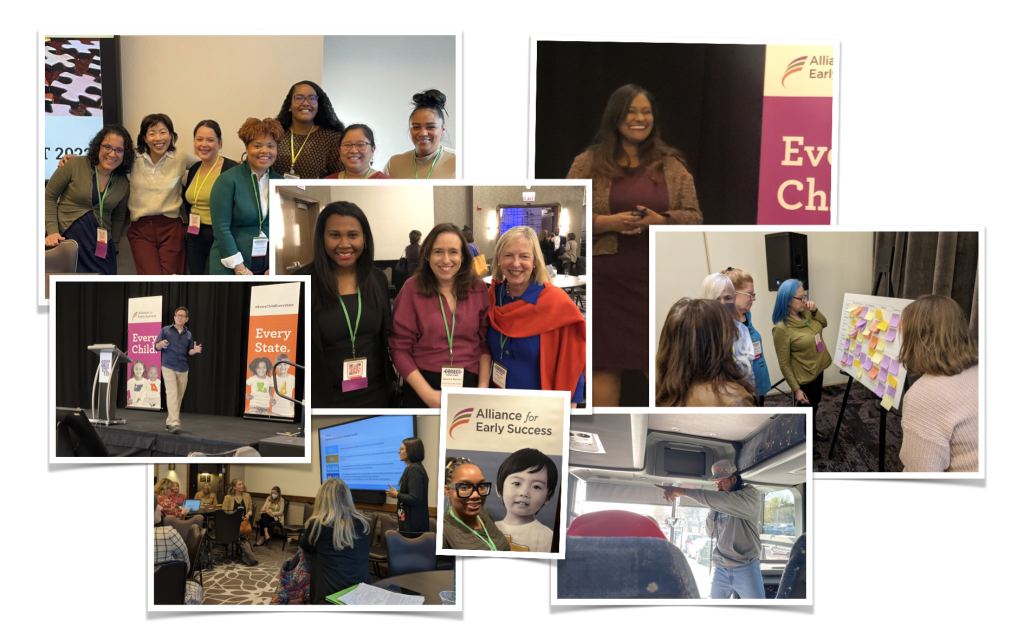 After a three-year break, the Alliance for Early Success hosted CONNECT22—a three-day event that brings together state advocates, national early childhood policy experts, and members of the organization’s communities of practice. Three-hundred early childhood champions from all 50 states and the District of Columbia gathered in downtown Chicago, November 14-16

“Our mission is to build connections among those working to improve state policies for young children, because community accelerates their work,” says Helene Stebbins, the Alliance’s Executive Director. “CONNECT is a great example of that—our allies not only learn new information from peers and national experts, they also get to know them, making it more likely they connect after the meeting with questions or requests.”

The conference opened with Stebbins welcoming allies back to in-person meetings and sharing the importance of connections as reflected in the Alliance new Theory of Change. Alliance allies are effective in winning better policies and more funding for young children, but building collective power among diverse voices is necessary to bring about bold change. It requires collaboration among traditional advocacy organizations, grassroots community organizers, parents, providers, businesses, BIPOC organizations, and others, in order to sustain the pressure to achieve big, transformational change for young children and their families.

The meeting wove together themes of racial equity, centering lived experience, and sharing power. It opened with an acknowledgement of Native Peoples on whose ancestral homelands attendees were gathered, and as a demonstration of solidarity with modern-day Native communities, attendees joined the Alliance in making donations to the American Indian Health Service of Chicago. (Donations can be made here.)

In the opening keynote address Dr. Somava Saha, Founder and Executive Lead of  We in the World, shared how she works to unlock the hidden assets in every community by focusing on deeply held values and the promise of human potential. Attendees also heard an inspiring and entertaining second keynote from Vu Le, Nonprofit AF’s irreverent and beloved blogger. He shared how nonprofits and philanthropy can own our awesomeness and unleash our full potential to create a just and equitable world.

Over the course of the event, attendees dug in to issues like Expulsions and Social Emotional Well-Being in Early Childhood, State Policy Levers to Support Families’ Economic Security, and Equitable ECE Compensation Strategies. The conference was also a chance for the Alliance’s communities of practice—including the newly formed Emerging Policy Professionals of Color and a group working on Centering Parent and Practitioner Power—to connect and work together in person.

When asked to reflect on what stronger advocacy together meant to them, more than two hundred attendees responded, and numerous themes emerged. Kayla Klein from Early Learner South Dakota says this would look like “an open line of sharing of resources and experiences between advocates that lends itself to both state and federal efforts… working together to bring a strong and united voice to the issues our early learners are facing in the United States.

Gail Piggot from the Alabama Partnership for Children adds that stronger advocacy together means “learning from the success of others, sharing wins and disappointments, and building consensus on advocacy goals.

And April Messenger from the Washington State Association of Head Start & ECEAP believes “stronger advocacy looks like families and communities, organizations and funders all working together with shared goals, visions, alignment and collaboration—where the ‘what you know’ becomes more important than the ‘who you know’ and where policy makers lean on our communities to create and implement stronger policies that work for the people they effect… nothing about us without us.”