EPPOC will bring together a racially diverse group of next generation leaders who will change the face of the early childhood policy and advocacy field. It will be a place for cross-sector collaboration, peer networking, professional development, and authentic discussion of topics and issues co-created and co-facilitated by its own members. 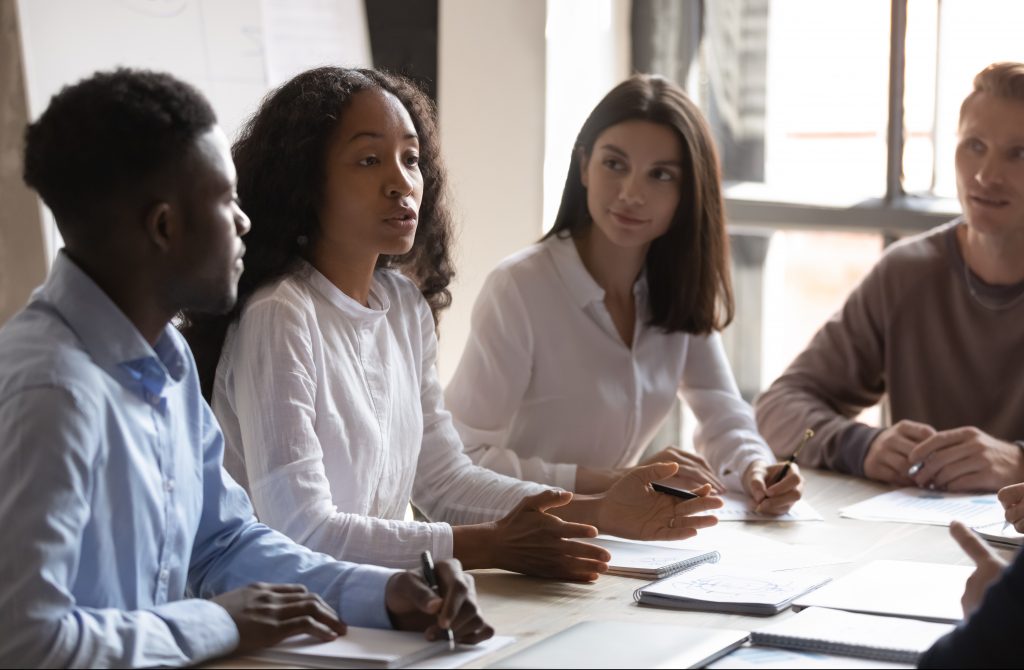 The Alliance for Early Success announced 10 leaders who will participate in the Early Childhood Emerging Policy Professionals of Color (EPPOC) cohort over the next year. This cohort represents national and state advocacy organizations from across the country.

The 2022 inaugural cohort members are:

Alejandra Londono Gomez is a policy analyst with the Center for Law and Social Policy’s child care and early education team. She brings expertise in child welfare, child development, early education, youth leadership, immigration, and advocacy. Prior to joining CLASP, Alejandra was a bilingual family service specialist for the Department of Children and Families, Division of Child Protection and Permanency in New Jersey. In this role, she advocated for the families she worked with and learned about how policies impact families’ ability to access supports and services firsthand.

Alejandra also brings strong quantitative and qualitative research skills. She also served in a leadership role and was a founding member of the Hispanic Association of Atlantic County, advocating for Hispanic and immigrant families. Alejandra received her bachelor’s degrees in sociology/anthropology and Spanish language and culture from Stockton University, and her master of arts in international relations from American University.

Amy is a skilled relationship builder, project leader, and advocate for social justice and human rights. Amy has an extensive career in the non-profit sector, specifically facilitating, developing, and managing programs. Prior to joining Groundwork Ohio, Amy strengthened and championed neighborhood adult education programs that served people with low literacy skills in the Chicagoland area. Amy earned her bachelor’s degree in Human Development from Earlham College and a master’s degree in Human Development, Early Childhood Education from University of Rochester.

Kaitlyn Rabb is a policy analyst at Rhode Island KIDS COUNT. She is responsible for policy analysis, advocacy, research, and project management in areas related to health. Kaitlyn received both her Bachelor of Arts and her Master of Public Health from Brown University. While at Brown, Kaitlyn wrote her master’s thesis on Black women’s breastfeeding experiences. She is deeply committed to reducing and eliminating racial and ethnic disparities in maternal and child health. She has also worked on the issue of childhood obesity, developing training curriculum materials for a family-based child weight management intervention through the Hassenfeld Child Health Institute. Kaitlyn also brings a deep commitment to community engagement. Her current work includes expanding Medicaid for undocumented children, extending postpartum Medicaid coverage to 12 months, and Infant and Early Childhood Mental Health best practices.

Keshia is the Community Engagement Manager with The Children’s Movement of Florida. She was born in Jacksonville, Florida and moved to Georgia as a pre-teen which is where she began her career in early childhood education while enrolled in her high school’s career and technical education programming alongside her college preparatory courses.

Armed with her passion and ambition, Keshia migrated to Tallahassee, Florida, to further her education with the hopes of making an impact on early childhood education. During this time, she was employed at a local child care facility as a floater. Keshia continued to educate herself through trainings and seminars, which resulted in her quickly matriculating into the lead teacher position and later, a director. Keshia’s experience while in high school has fueled her passion to assist the next generation of early childhood educators in their high school’s career and technical education programming by becoming a professional development specialist with the Council for Professional Recognition.

Outside of early childhood education, Keshia is also passionate about breastfeeding, safe birthing practices and black maternal health. Keshia has recently become certified as a doula and breastfeeding counselor to mitigate black maternal and infant deaths in her community.

As the Senior State Policy and Outreach Manager, Kyra Miller supports the National Women’s Law Center’s goal of expanding access to high-quality, affordable child care and early learning as well as other policies that promote equity and the advancement of women and girls. Kyra cultivates relationships with state advocates, national partners, and strategic stakeholders to provide technical and developmental support.

Kyra is a passionate advocate for social justice and human rights. Most of her career has been in the non-profit sector doing policy and advocacy work with state advocates providing technical assistance, developing, managing, and facilitating programs. Kyra loves to manage interns to help with their skills- and networking-building as they begin their careers. Kyra received her bachelor’s degree in Sociology and History from Ohio Wesleyan University and a master’s degree in Social Work from the University of Michigan.

May Esperanza Losloso (she/her/hers) is the Community Engagement Director at the Children’s Defense Fund – Minnesota. She staffs the Voices and Choices for Children Coalition, works with and includes community voices in various advocacy efforts, and serves on the policy team. She has almost ten years of experience in education and working with youth. She is committed to equity, centering folks affected by policies in solutions, and re-imagining systems so they work better for all. May values building community with people of color and American Indians while strategizing for liberation and healing.

Melissa Mares is the Director of Early Childhood Initiatives at the Colorado Children’s Campaign and a co-convener of the Raise Colorado Coalition and the Growing Our Future Coalition. In this role, she leads the Children’s Campaign’s early childhood portfolio, coordinating policy and coalition development, community engagement, and advocacy for Colorado’s youngest children, their families, and their caregivers. As a co-convener of Raise Colorado, Melissa supports work to advance equitable policies, programs, and practices that help expecting families, pregnant people, infants, and toddlers thrive. Melissa also co-leads the Growing Our Future Coalition, a statewide team that has secured long-term, national funding to transform child care in Colorado, envisioning a future where we truly value caregiving in all the ways it happens in children’s lives.

Melissa first joined the Children’s Campaign as an Early Childhood Policy Fellow in 2020 and became a Senior Policy Analyst in January of 2022. In these roles, Melissa coordinated the community input process that led to the creation of the Colorado Department of Early Childhood. She also supported the transition planning for that department as a member of the Early Childhood Leadership Commission’s Transition Advisory Group (TAG), advocating for the needs of families and providers throughout the transition process.

Prior to joining our team, she taught kindergarten at a Spanish immersion school in Eugene, Oregon. She especially loved teaching and supporting the socio-emotional development of her students, trying to do her part to ensure that they could grow up with the necessary tools to become resilient self-advocates and good friends.​ Before teaching, she was a Constituent Services Advocate in the Denver office of Senator Mark Udall. She is a graduate of George Washington High School in Denver and earned her B.A. in Comparative Studies in Race and Ethnicity and her Master’s in Elementary Education from Stanford University. When not at work, you can find her playing soccer, running, in a yoga class or cooking something new.

Micayla Tatum is the Associate Director of Early Childhood Policy at Mississippi First. She supports Mississippi First in the development and execution of its early childhood policy agenda, with a particular focus on Pre-K and childcare.

Micayla taught for more than five years, is a 2016 Teach for America alumna, and the chair of her local NAACP’s Education Committee. Micayla was also a Teach Plus Mississippi Senior Policy Fellow and a recipient of Amherst College’s Class of ‘54 Commitment to Teaching Fellowship Award (2021). She earned two BAs in American Studies and Anthropology as well as a certificate in Native American and Indigenous Studies at Amherst College and an MEd in Education Policy and Leadership at American University.

Sydelle Barreto is currently the Policy Communications Specialist at the National Association for the Education of Young Children (NAEYC). In her role, she helps lead communications around NAEYC’s policy and advocacy work and uplifts the voices of early childhood educators. Prior to NAEYC, she championed federal and state policies that supported strong school leadership, educational equity, and the diversification of the educator pipeline.

Sydelle is deeply passionate about advocating for both educators and students of color. Her work is centered around creating safe and inclusive learning environments for marginalized students.

Sydelle is also working towards her M.A in Philosophy and Social Policy at George Washington University and will be serving as a Graduate Assistant for a Philosophies of Disability course this fall. She earned her B.A. in Political Science and Economics from Northeastern University.

Tobi Adejumo is an ECE Ph.D. Candidate at the University of Colorado, Denver, and a Research and Policy Associate at the Center for the Study of Child Care Employment, University of California, Berkeley. At the center, Tobi is involved in various SEQUAL (Supportive Environmental Quality Underlying Adult Learning) research projects that seek to improve work environments for ECE educators. Her dissertation research and interest, which is closely related to her SEQUAL work at the center, is specifically focused on policy solutions to improve the working conditions of immigrant early educators. Tobi is a movement-builder, passionate about expanding access to early ideal learning environments, not just for families and children of color that look like hers, but also for creating access to ideal working environment for the educators of color teaching and caring for them. In addition, she has taught early childhood education, family engagement, and child ecology courses to future early childhood educators at the University of Colorado, Denver and the University of Minnesota. She has co-authored articles on ECE and Head Start workforce well-being, quality and child outcomes for diverse learners, working with diverse families and children, and kindergarten transitions. She earned her BA in English Education and her Masters in Teaching, Learning, and Leadership. On weekends, Tobi enjoys trying out new pasta recipes with her two little boys.

Click here if you’re part of an Alliance grantee organization and would like to learn more about EPPOC and additional involvement opportunities.

Inside this Resource Center